On the Psychology of RPG Groups and Table Space


During one of the seminars I gave at GenCon this year, one of the attendees mentioned the response that the players in her group have to the sound of shaking dice. Namely that all side conversations would stop and everyone immediately queued in on what was about to happen, whether they knew what was going on or not. This led to a larger discussion on small group interactions and psychology in a tabletop roleplaying game group. There have been some requests that I discuss the topic again, from friends online who were not able to attended, so here is my attempt.

A disclaimer – I am not a psychologist. What follows is my own interpretation of behavior and group interaction based solely on my own experiences in gaming, the military, and professional work environments. (Post some comments if you disagree; I’d love to hear your own ideas.

This article is an adaptation of a lengthy post I made on G+ a few days ago. The Games on the Shelf is a better place to share and explore this topic.

When I started to think about how to explain the seminar conversation, I ended up focusing on two words: Position and Posture. Each has a profound effect on the way attention focuses and guides the dynamic of a small group. When we are talking about a traditional RPG in which there is a GM and players and varying degrees of narrative authority, there still tends to be a view of the GM as a de facto game leader, and transitively, the group leader. The behavior of the person perceived as being in charge is a very powerful thing. Humans respond naturally to leadership. It is a strong part of being a social creature. 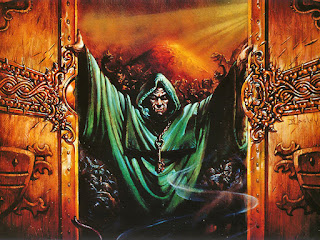 The position of gamemaster is perceived as a leadership role. That person’s position in the group further informs that position. When the GM is seated at the head of a table, there is an unspoken formality brought into the relationship. The leadership position is physically realized at the table. The players are seated in subservient positions around. Many games will include a screen further promoting not only the authority of the leader, but also his insulation from the group. He is separate from the player. Superior, authoritative, the keeper of knowledge, and controller or fate; whether or not people ever realize the ramifications of this, it is taking place. The GM speaks, and all heads turn to face the leader.  Players ask for permission for their own actions, in the form of rolling a skill, or making an attack. While the actual behavior is asking for interpretation of result, the social dynamic is that of parent/child, asking for permission for the action.  The player rolls, asking for the GMs permission to know something, and the GM then grants or denies permission of that action based on whatever game or group criteria have been established.

Knowing this underlying authority structure, it can then be subverted and repurposed for dramatic need and betterment of the game. Changes such as using a round table, playing a game where narrative control lies in the players, playing without a GM screen - all of these reduce the separation between player and GM in the small group space. This will an effect on the dynamic at the table. Players will be more relaxed in their interactions in the game, with the GM, and with each other.  If a GM understands how each of these elements contributes to the interpersonal relationships at the table during play, she can better take advantage of them as a tool, rather than just an aftereffect of the game’s make up. Changing your table position, even just for a session, when done specifically to have an effect on table mood can be a powerful tool. Compare these two diagrams : 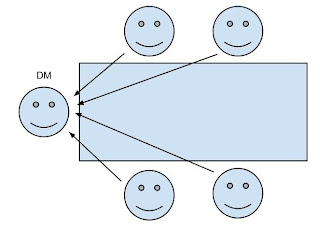 In this first example, all of the player attention during narration or result interaction is focused on the end of the table. It points away from the community space and away from the 'game'. It instead is focused on the person running or facilitating the game. This is a textbook case of the physical space providing enhancement to the authority figure's status at the table. If the GM and one of the players switch places like this: 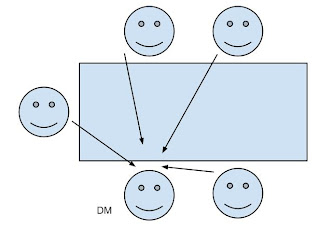 We now see something different. The attention is still placed on the GM, but the focal point of that attention is much more centered on the community space. This may lead to a more group centered feel of authority as opposed to the dictatorial aspects of the previous setup. Here the group looks more inward on the play space rather than outwardly at the end, looking into the game instead of over it.

The presence or positioning of the GM screen can also have a strong effect in these situations. 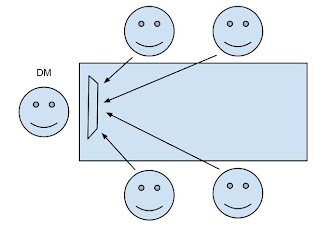 Traditional
This configuration again supports the me vs. the rest of you adversarial authoritarian setup of traditional D&D style gaming. The GM is not only in the position of power, but his information is firmly forbidden and restricted from player eyes. What lies behind is none of your business, and you need permission to find out. 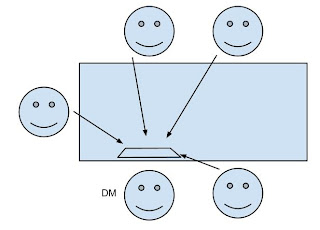 Traditional Placement with Adjusted Seating
This arrangement finds a middle ground, in that the GMs seat position says "I am part of the group" but his secrets are still forbidden and his alone to keep. This layout does however pose some interesting issues for the table in that the players' positions can seem to be indicative of their station in the group. The player to the GMs right could be interpreted to have privileged seating due to the placement of the screen side panels. Different groups may react to this in different ways. 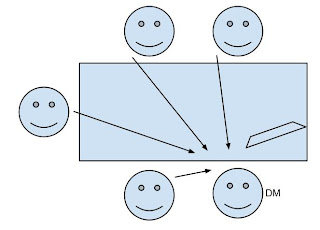 Unorthodox Placement and Seating
In this last example, the GM has moved her position to the middle of the table. Additionally she has placed the GM screen away from all of the players, including herself. The GM is part of the group, and the secrets, while secret, do not belong to the GM as a zealous keeper of hidden knowledge, but as a member of the group whose job it is to share them when appropriate. This can be a very powerful asset to any GM looking to change things up. Many games which would benefit from a rules quick reference on the back of a screen but do not necessarily require heavy duty secret keeping might benefit greatly from this option.

I personally find reference charts very useful as a reminder to myself when running various games. I also like to be in the middle of things, and be an enabler of the players' awesomeness at the table, and this option has served me well for many of my games. As a side note, I do use the traditional setup most of the time when playing D&D, but will vary it up from time to time when the mood or session would benefit from it.

Posture
Combined with position at the table, posture provides the other side of the physical space in which the GM operates. Sitting, standing, leaning, slumping; all of these contribute to the energy that a GM projects at the table. Posture provides a signal of intent. It is usually subconsciously interpreted. Have you ever seen a person, and just by the way they “looked” you felt that they were a soldier?  Ever look at someone and just get the feeling that they “know how to handle themselves”? Been nervous near someone and not really understood why? Most of this comes down to posture and how that person was carrying himself.

Posture contributes to someone else’s idea of another’s self-confidence, capability, threat essessment, or even vulnerability. These are things that our ape brains have evolved over the ages to help us survive. Like any other tool, it can be used to your advantage if understood. Using your own body space and posture as a way of providing a subtext to a game environment is one of the greatest assets that an in person tabletop RPG can have. An aggressive posture during an RP scene will have a tangible effect on how the players interact with that NPC. The same thing goes for a submissive posture. 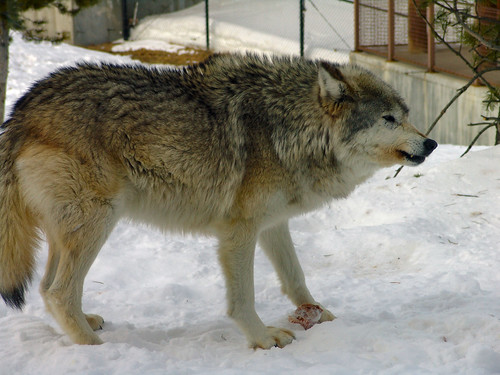 It may sound silly at first, but think of how you act around dogs that you don’t know. How does the dog's posture and position affect your own behavior--or at least your perception of the dog's intent? The dog is also a social creature, extremely focused in on interaction and station within the pack. However, they lack speech. They do the same things that we do in jockeying for and learning about the hierarchy within a group, but they do it all without words. It is all about body language. Posture, Position, Presence. Imagine that while you are GMing a game there are two conversations going on simultaneously. The verbal one you are completely aware of and the non-verbal one of which you may or may not be aware. Becoming aware of the non-verbal conversation allows you to add something extra and special to your games. It’s something that most people may never consciously pick up on, but will almost always respond to.

With all of this in mind, I would also add that incorporating these behaviors into the actions of the NPCs in the game can also add a new dimension to the game. When you are narrating a scene, add in commentary about that NPCs posture and position. Talk about what kind of presence they project in the scene. It adds a lot of flavor to the behavior that you then narrate and role play. Describe their physical posture and position. Assume their posture and position yourself if it is practical. Combining the two methods is a powerful way of conveying the impact of this aspect of an interaction while keeping things fresh by not always doing one or the other.

I look forward to hearing your own thoughts on how people interact at a gaming table. There really is a lot of room to explore these interactions, how verbal and nonverbal behaviors play off of one another. Vocal tone, volume, etc. can all add to the effectiveness of the nonverbal side of things. Please share your own thoughts and experiences and keep the conversation going.

Special Thanks to Tresi Arviso for edits and suggestions.
Posted by Bob at 7:09 AM